Wayne Douglas Gretzky, (born and raised in Brantford, Ontario January 26, 1961) is a retired Canadian ice hockey player and former ice hockey coach. Nicknamed 'The Great One', he is generally regarded as the best player in the history of the National Hockey League (NHL), and has been called 'the greatest hockey player ever' by many sportswriters, players, and the NHL itself. Upon his retirement on April 18, 1999, he held forty regular-season records, fifteen playoff records, and six All-Star records.

Wayne Gretzky is the only NHL player to total over 200 points in one season – a feat he accomplished four times. In addition, he tallied over 100 points in 16 professional seasons, 14 of them consecutive. Gretzky's jersey number, 99, has been retired by all teams in the National Hockey League. He was voted one of six players to the International Ice Hockey Federation's (IIHF) Centennial All-Star Team in a poll conducted by a group of 56 experts from 16 countries 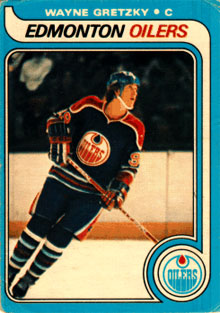