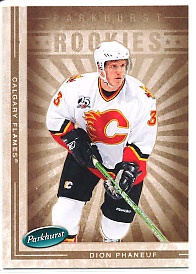 Dion Phaneuf (born April 10, 1985) is a Canadian professional ice hockey defenceman and captain of the Toronto Maple Leafs. Dion Phaneuf was drafted ninth overall in the 2003 NHL Entry Draft by the Calgary Flames, and mad...