Claude Percy Lemieux (born July 16, 1965) is a retired Canadian professional ice hockey player. He last played for the San Jose Sharks before announcing his retirement on July 8, 2009. Claude Lemieux was drafted in the second round of the 1983 NHL Entry Draft by the Montreal Canadiens. He played with the Canadiens from 1983 to 1990, winning the Stanley Cup with the team in 1986. In September 1990, Montreal traded Lemieux to the New Jersey Devils. Calude Lemieux won his second Stanley Cup in 1995, he also won the Conn Smythe Trophy that year as the playoff MVP. Shortly before the beginning of the 1995–96 season, Claude Lemieux was traded to the Colorado Avalanche. When the Avalanche won the Stanley Cup in 1996, Lemieux became only the fifth player in NHL history to win back-to-back Stanley Cups with different teams. In November 1999, Lemieux was traded back to New Jersey to Colorado. He won his fourth and final Stanley Cup with the Devils in 2000.

Throughout his career, Lemieux was noted for playing his best games during the postseason. Once Claude Lemieux was called up to the NHL for good during the 1985-86 season he played in 15 consecutive postseasons. Claude Lemieux also had a reputation as one of the league's dirtiest players; in fact, a ESPN special entitled 'The Top 10 Most Hated NHL Players of All Time' ranked Claude Lemieux second, behind only Sean Avery. 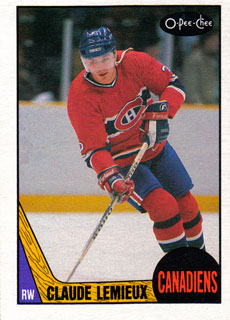